Plan the ultimate stag do bar crawl with the best Ruin Bars in Budapest. 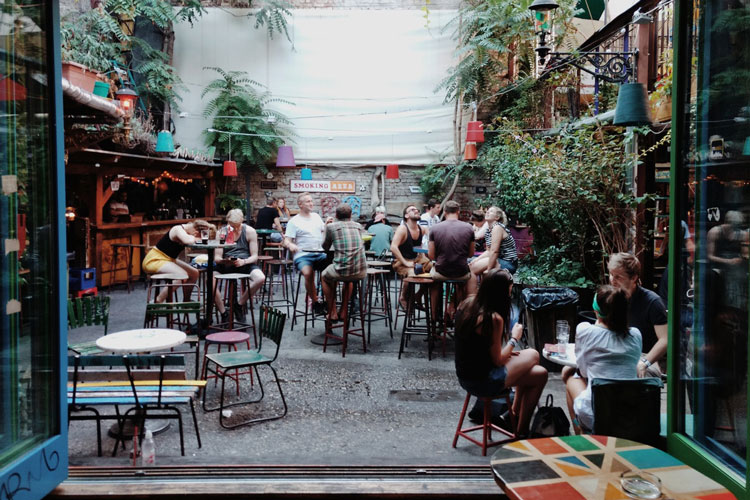 There is no denying Budapest has an electric and eccentric nightlife, but, there is nothing more bustling, funky, fun and all-out crazy than its famed Ruin Bars.

Ruin Bars first burst onto the scene in 2001 with Szimpla Kert,  the mecca of all ruin bars. Its creators wanted to give people somewhere cheap to drink while making use of the crumbling and dilapidated buildings in the VII District that had been abandoned and left to rot since World War II.

The idea was simple; find a derelict and decaying building before it's demolished, fill it with ome odd furniture and miss-matched items and serve some cheap drinks - little did they know, this 'simple idea' would  kick-started a trend across Europe!

Now these ruins of abandoned buildings, stores, and parking lots in Budapest’s old District VII neighbourhood have been transformed into extraordinary watering holes and become one of the most impressive underground bar scenes in the world!

The Ruin Bars are also a not to be missed opportunity during your stag do.

With no signs or queues of people waiting out the front, these ruin bars could easily go unnoticed. But, once inside you will find yourself in the middle of a hip, eclectic, funky bar bustling with people, great music and cheap beer.

From hidden courtyards, old-rickety furniture to hammocks and rusty cars that double as a table and chairs, these ruin bars are our top pick for your stag do in Budapest. 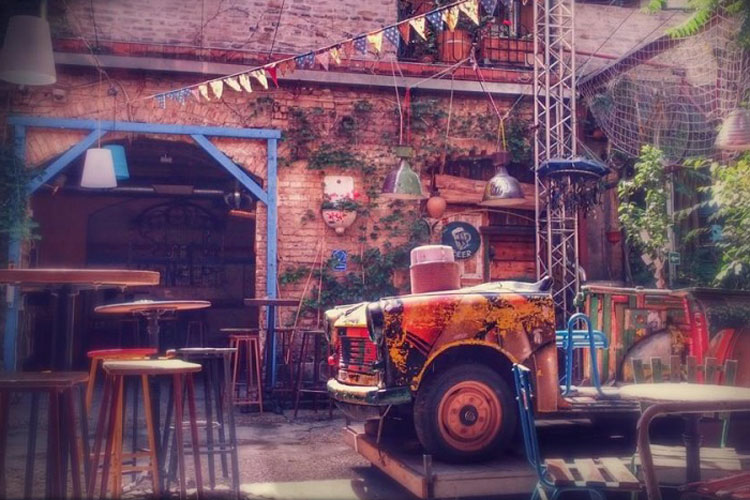 The original ruin bar and mother of all ruin bars in Budapest, Szimpla Kert, shows crowds older is better when it comes to nightlife in this impressive city.

Built in an abandoned factory, Szimpla Kert is the most popular and most famous ruin bar in Budapest and features a large open courtyard, crazy furniture, a library, cocktail bars, artwork inside and out, pumping music and even an old stripped-down Trabant (a communist car) that doubles as a table and chairs.

They also sell pizza, which is great when you plan to have a big night out.

Along with being a popular watering hole, Szimpla Kert has also played host to a number of markets, festivals, concerts, theatre shows and many different cultural events since it first opened its doors in 2001.

Located in the Jewish Quarter of the 7th district of Budapest, Szimpla Kert started as a place for people to find a cheap drink in a relaxed environment but has grown to become a major tourist attraction and community centre.

While Szimpla first opened its doors in 2001, it was not in the same location as it is today. The smaller Szimpla that kick-started the Ruin Bars trend was located on Kertész street and moved to Kazinczy street, where it remains today in 2004.

Instant | A must visit during your stag do 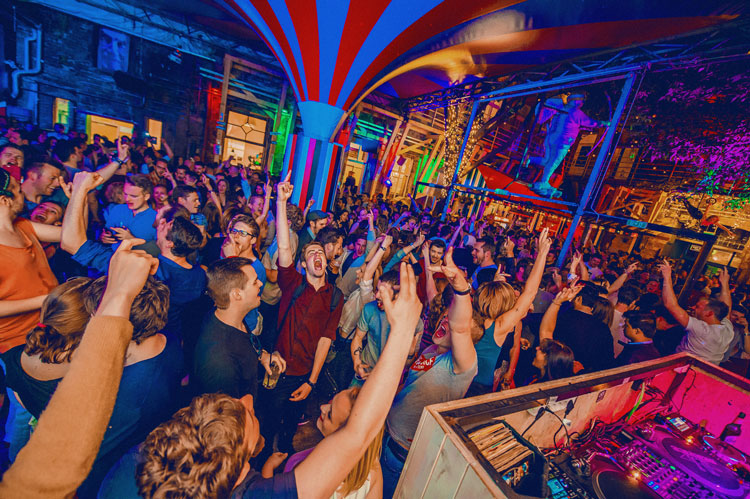 The history of Instant is as impressive as the bar itself.

Instant's story started in 2008 when the club first opened its doors on Nagymező Street. However, in 2010 they rid themselves of the typical ruin bar aesthetic and the owners redesigned the entire place to become the fairy-forest-like labyrinth that it is now known for.

Locals and international revellers flocked to Instant to enjoy live concerts and dance the night away amid the eccentric interior, blaring music and thematic dance floors.

But, towards the end of 2016, trouble was brewing for Instant as the owners of the building wanted to capitalize on a different kind of tourist venture and turn the space into a hotel.

However, it was not the end for Instant. The bar than jumped across to Akácfa Street to join forces with Fogas, another popular ruin bar. Both bars carry on together and Instant has kept some of its forestry magic and added some post-future, cyberlike design.

First-time visitors often have to do a double-take when they first lay their eyes on the jumble of strangely designed rooms sprawled across two former tenement buildings that make up this ruin bar.

The eccentric interior, which includes a boar-shaped disco ball, a herd of jumping rabbits, giant flying animals and furniture pinned to the ceiling are just some of the things set to amaze you on your stag do in Budapest and visit Instant.

Trust us, the menu of burgers and fries are the simplest thing about the place.

Along with several dance floors, 8 bars and two gardens, Instant and Fogas have 1200 square meters dedicated to partying, drinking, celebrating and showing you and the lads a good time! 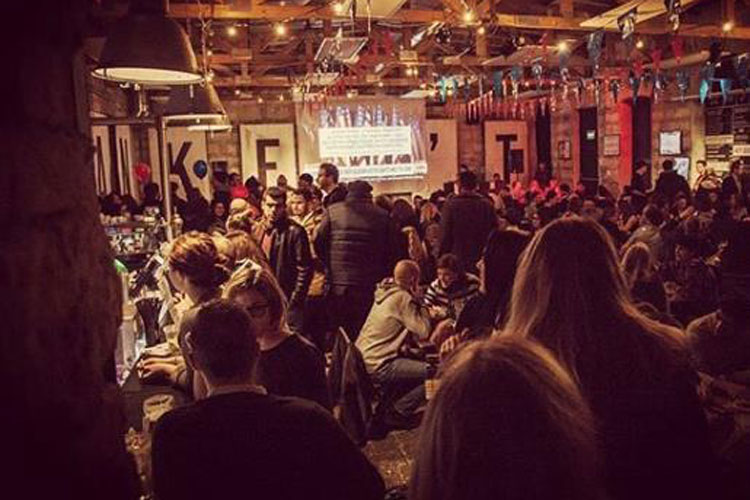 Located in a former factory and featuring a massive courtyard, dance floors, gallery, event spaces and even an escape-room, Anker’t is one of Budapest's largest and most popular ruin bars among locals and tourist alike.

Not only does Anker’t serve up plenty of cheap-cold beer but they also offer plenty of grilled meaty meals - a carnivore's dream and a stag party favourite.

Along with the DJs, dance floors and party anthems, Anker’t will host themed parties, fashion shows, outdoor screenings of major sports events, slam poetry nights, artisan food markets and a vegan flea market that is said t have the best vegan food in the city. 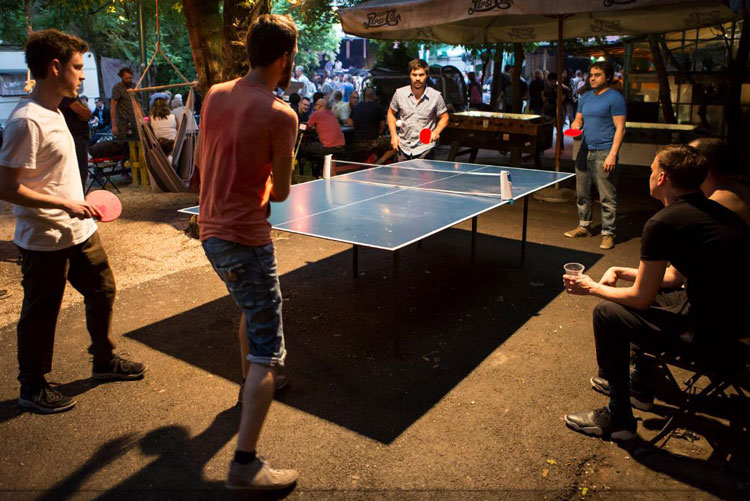 Some may argue Dürer Kert is not a 'Ruin Bar' and more of an open-air club...

Either way, be reminded of your student days with one of the biggest party hot spots in Budapest. A former university building, Dürer Kert will see you sink down a few beers while playing foosball, Ping-Pong, darts or a French game called pétanque.

More importantly, Dürer Kert has an impressive courtyard, which often hosts renowned international and local bands. This is a one-stop shop when it comes to drinking and nightlife on your stag do in Budapest.

Think massive nights and then times that by about 10!

Due to its youthful-party atmosphere, Dürer Kert is the number one sport for 18 - 25-year-olds and has a pebbled beer garden, numerous dance floors and hosts a number of events and large concerts. If you want to drink until dawn, you'll be able to party until you drop at Dürer Kert during your Budapest stag do.

The only downside of Dürer Kert is its location as it is a little way out from the city centre - but don't let that stop you from enjoying all that Dürer Kert has to offer! 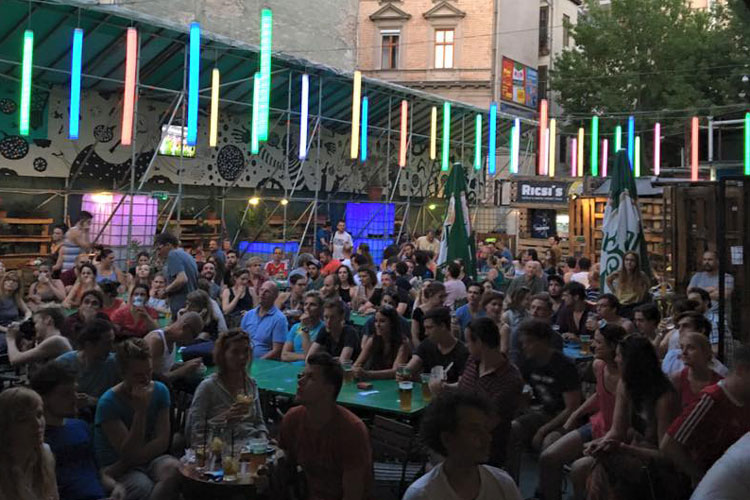 While Racskert is one of the newest ruin bars in Budapest, it has no problem drawing in a crowd or competing with the more established watering holes Budapest has on offer.

Formally an abandoned parking lot, Racskert is now a big ramshackle garden bar and perfect for some outdoor drinking during your stag do. 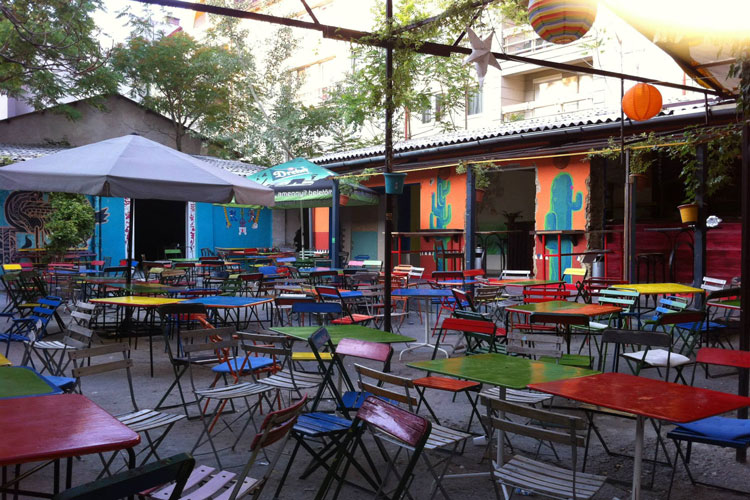 With colourful tables, murals of Aztec motifs and a taco bar, there's a Mexican feel to Ellato Kert, a popular ruin bar located in the bustling Kazinczy Street in downtown Budapest’s Jewish District.

This ramshackle property is highly frequented by a hip crowd and party revellers alike. Whether you want to have a relaxed evening or a fun-filled night amid eclectic settings, Ellato Kert will cater to you on your stag do in Budapest. 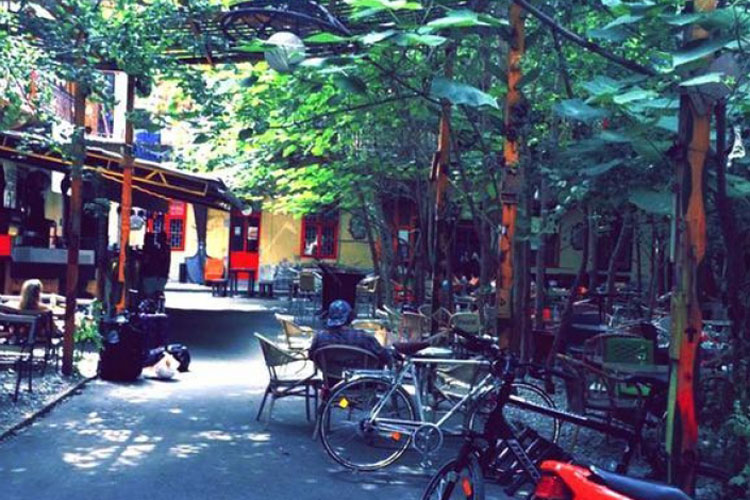 Grandio is an all in one ruin bar, it's an urban jungle filled with sprawling plants and herds of enthusiastic partygoers, but it is also home to a hostel.

Located on Nagy Diófa Street in the city’s beautiful Jewish quarter, the Grandino is walking distance from the Blaha Lujza tér metro station and other prominent restaurants, pubs, supermarkets and hotels.

It's the perfect watering hole for your stag do in Budapest and a great place to get the stag night started.

Famed for its outdoor tree-filled courtyard, Grandio is mostly filled with travellers and people on bar crawls, including stag parties, due to the fact that it’s also a hostel.

If you're in charge of making the next stag do one to remember then let us take the pressure off you - Maximise offers tailored Stag dos in Budapest and other world-famous party destinations. In addition to this, we have amazing activities and nightlife options on offer for your Budapest Stag Do including our fantastic Ruin Bar Crawl!